Thanks to Vivian Henoch, editor of My Jewish Detroit, for allowing me the opportunity to write this essay in the June edition. I’d like to share it with you here, though many of my faithful readers know bits and pieces of this story. I’m so excited for the publication of my 8th book – this Monday!! (Join me for my June 12th book launch party. Click here to RSVP.)

I was 30 years old before I ever made bread by hand. I love bread. Most people do. The softness is reassuring, the texture is soothing, and when you’re hungry, bread is an easy and satisfying food. In fact, there is the notion that barest sustenance for a poor person or prisoner is bread and water.

Our language is filled with references to bread. We call money ‘bread’ or ‘dough.’ To ‘break bread’with others is considered a peace-keeping and community-building gesture. In Christianity, bread symbolizes the body of the Lord. In Judaism, Sabbaths and holidays are inaugurated by two loaves of challah; and the longest prayer after a meal is when bread is served as the first bite.

There is something special about bread 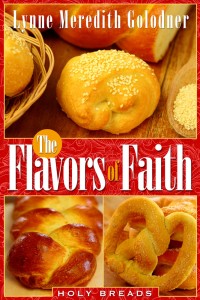 A few years ago, my friend David Crumm, the formerFree Press religion writer and now publisher of  ReadtheSpirit.com, asked me to write a book for his press. As a former journalist who specialized in food, faith and family, I proposed a series called The Flavors of Faith, which would focus on the ways different communities and cultures use food as a way to transmit tradition, to bring people together. As I discovered, there’s much to be said about bread. In mere flour and water and yeast, there is the power to convey story, to nurture and nourish, to symbolize and to ritualize.

Growing up on challah

I grew up a Reform Jew, more cultural than religious, and in our home we ate challah only on Friday nights or before holidays. On Passover, our observance was defined by the absence of bread, of course, but I never gave much thought to the idea that bread framed much of our Jewish observance.

There was always a faithful spark in me, and as I grew older, I ventured into the world of observant Judaism where I met people who made bread every week. It was then that I started making challah on Thursday nights. Baking challah slowed me down and focused me on what I believed was important. Making food from scratch, by the hard work of my own hands, was an expression of creativity, of love, of communication of meaning.

I see why bread represents God for so many – the rising, the notion of redemption, basic ingredients becoming something that keeps you going.

When I became a mother – I have four children – I would bake with my little ones – standing on chairs at the kitchen counter, loving to punch the elastic dough and seeing it spring back in the big bowl. They would shaped their loaves and brush them with egg wash. At our Sabbath table, they’d each have their own oddly-shaped tiny loaves over which to say the blessing. 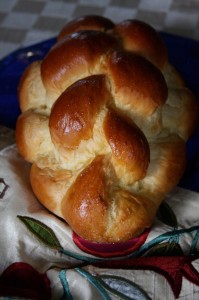 Baking bread became a way to teach tradition to my children tangibly, and I hope the sensory memory of baking bread for our Sabbath will remain vivid for them as one of the many flavors of Judaism that represents who they are and the beauty of our heritage.

Lately, my husband and I have been baking sourdough bread every week. It was a cost-saver at first, but it has become symbolic of who we are as a family and how we want to live: slowly, wholesomely, with foods as close to the source as possible.

As a food writer, I often think about how we elevate our existence by what we eat, how we eat and with whom we break bread. And, so I began writing about the ways we come together over food, how we transmit tradition, how we control others or let go of control (think of the accommodations you must make for those who are vegetarian, gluten-free, etc.).

I spent two years researching the ways in which bread is symbolic and significant to so many communities and what I found was that bread serves almost as a “universal truth,” a connection we make with Christians and Muslims and Native Americans and others.

In my research, I had the wonderful experience of visiting the Islamic Center of America in Dearborn to interview women who have been baking bread at the mosque for more than half a century. Twice a week, women gather in the kitchen there to bake delicious breads, the sale of which has kept the mosque thriving.  Bread sales amount to nearly a quarter of a million dollars a year.

I was a Jewish woman in a Muslim milieu, a scarf wrapped around my head out of respect, and noticing how similar everything was to our own Jewish customs.  I noticed the word tahara on the wall by the bathroom, and in discussion with my hosts, learned that it means in Arabic purity; the Hebrew word for purity is taharat.  A tree on the wall honored donors to the mosque; many synagogues have a similar display.

At the mosque, Imam Qazwini told me the bread is not religiously symbolic, but rather culturally, and he detailed mentions of food in the Quran where Muslims are instructed to feed the poor and care for the needy. “In Islam, feeding others is one of the most noble deeds in God’s eyes,” the Imam told me. After my interviews, old women offered me hard-boiled eggs and olives and tea and I found that the hospitality, the warmth, their offer of food and story, were the same as in my Jewish world, as in all our worlds.

This article was published in MyJewishDetroit, May 30, 2013.