For the past month or so, I’ve been trying to be mostly vegan, with bouts of vegetarian, and it’s working. Why would I make such a drastic change when I love meat?

To be healthier and to lose weight.

Poised to undergo bloodwork to check all my levels and make sure I am healthy, I realized that my genetics might predisposition me for high cholesterol, and I know I’m not the kind of person to pop a pill daily. So I opted to change my diet and see what happened. I haven’t done the blood testing, yet, but I can honestly say that I’ve shed a few pounds and my digestion works perfectly when it is mostly plant-based. 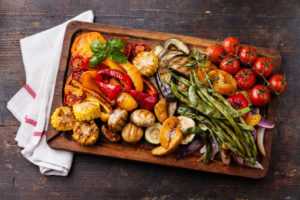 My kids make fun of me. “Oh yeah, you’re vegan,” they say, rolling their eyes. “We’re not going to be vegan, though!”

I’m not vegan. I prefer it, to be honest, because it’s so straightforward and honest, knowing what’s in my food. But there are times I add cheese or egg to my food and I am ok with that.

And then along came Rosh Hashanah, the Jewish New Year, and my aunt informed me that there would be homemade gefilte fish, my late grandmother’s delicious recipe, along with chopped liver. Those delectable Eastern European foods that Ashkenazi Jews salivate over. Yes, some veritable favorites that would tempt me to break my vow and return to the world of animal-eaters.

I thought about it. Boy, was I tempted. But in the end, I refrained.

And it wasn’t that hard.

I know all the problems with eating animals – the cruelty of it, the ways they are killed, all the reasons that killing animals for food is increasing the global temperature and polluting our world. I even believe that when we ingest an animal that was treated badly, we ingest all the anxiety and stress that animal lived through and it adds to our own.

Still, I love the taste of long-cooked meat that falls apart. I love the familiarity of my grandmother’s gefilte fish or the buttery-ness of salmon.

But I’m not eating it.

That’s a realization I came to during the 10 years that I kept kosher. Sure, I love shrimp. Mussels and clams? Yum!

But I didn’t eat them for a decade because I made a life choice that prohibited those shellfish (along with pork and the mixing of milk and meat). So be it. It’s just food. And it’s a choice.

We tend to forget that we humans eat three times a day (maybe more) and the purpose of eating is to sustain our bodies. Enjoyment is secondary.

Of course, there’s no reason not to enjoy our food. We don’t have to live by bread and water alone.

But why make ourselves, literally, sick, because we can’t exercise self-control over what passes our lips?

On Rosh Hashanah, both nights, my family sat down to long tables of incredible dishes. A tray of vegetables sat in the middle. Matzo balls are just as good in vegetable soup as they are in chicken soup. Noodle kugels with spinach or quinoa veggie patties are just as tasty when seasoned right as falling-apart brisket or lemony chicken.

Food is food is food. It all tastes good. And there will be more tomorrow.

It’s not hard to make a change when it’s done for the right reasons. I feel better, lighter, in sync, when I eat a plant-based diet. I can live with the occasional egg or sprinkling of parmesan. I’m ok with it. I don’t need to be too strict.

And I don’t need to indulge just because chopped liver tastes so good.

There are greater reasons to do things than because we like it. The long-term outcome far outweighs momentary satisfaction. So please, stop making fun of me for trying to be vegan/vegetarian. What’s it to you, really?